Biotech and drug development research are crucial for advancing human health and wellbeing. In recent years, there have been significant advancements in our understanding of biological systems and novel biotech discovery tech, delivery mechanisms, progress in ai drug discovery and more.

One of the key challenges in drug development is identifying compounds that can effectively target a specific biological pathway or disease without causing harmful side effects. Traditionally, this process involved testing compounds on cells or animals in a laboratory setting, which is time-consuming and costly.

Recent advances in technology have enabled the use of computational modeling and simulation to predict the potential efficacy and safety of compounds. This approach allows researchers to quickly and efficiently screen large numbers of compounds and identify potential candidates for further testing. In addition to computational modeling, the use of genetically-engineered animal models has also become increasingly common in drug development research. These models allow researchers to study the effects of compounds on specific biological pathways in a more controlled and precise manner.

Despite these advancements, drug development remains a complex and challenging process. Success rates for new drug candidates are low, and the cost of bringing a new drug to market can be prohibitively expensive. However, continued investment in research and development in the biotech and drug development fields has the potential to yield significant benefits for human health.

Overall, the field of biotech and drug development research is making important contributions to our understanding of biological systems and the development of effective treatments for a wide range of diseases. By continuing to invest in research and innovation, we can improve our ability to discover and develop new drugs and enhance human health and wellbeing.

Need for metascience in biotech

Metascience, or the study of scientific research itself, is crucial for advancing our understanding the most effective approaches for drug discovery: examining the strengths and limitations of different research methods, disease models and studying the factors that contribute to successful drug development.

One of the key challenges in the field of biotech and drug research is the high cost and low success rates of drug development. Trying to better understand the factors that contribute to the success or failure of drug candidates, studying the limitations of current disease models and identify more accurate and predictive models that can be used to test the potential efficacy and safety of drug candidates. This can improve the reliability and validity of research findings and ultimately lead to the development of more effective treatments.

Eroom’s Law is the observation that the cost of developing a new drug has been increasing at an exponential rate since the 1950s. The average cost of developing a new drug was $320 million in 2010, up from $80 million in 1980. The new version of the law, which includes the cost of clinical trials, puts the average cost at $2.6 billion. The law has been used to explain the high cost of prescription drugs and the lack of innovation in the pharmaceutical industry. 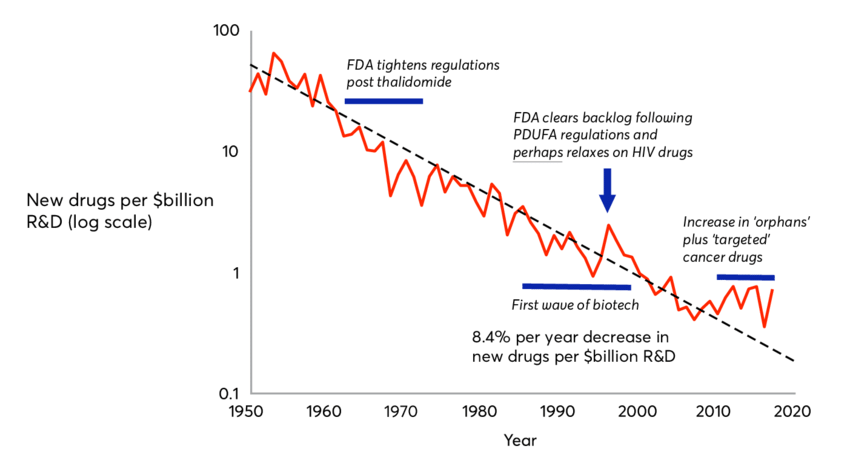 “Successful drug discovery is like finding oases of safety and efficacy in chemical and biological deserts. Screens in disease models, and other decision tools used in drug research and development (R&D), point towards oases when they score therapeutic candidates in a way that correlates with clinical utility in humans. Otherwise, they probably lead in the wrong direction. This line of thought can be quantified by using decision theory, in which ‘predictive validity’ is the correlation coefficient between the output of a decision tool and clinical utility across therapeutic candidates. Analyses based on this approach reveal that the detectability of good candidates is extremely sensitive to predictive validity, because the deserts are big and oases small. Both history and decision theory suggest that predictive validity is under-managed in drug R&D, not least because it is so hard to measure before projects succeed or fail later in the process. This article explains the influence of predictive validity on R&D productivity and discusses methods to evaluate and improve it, with the aim of supporting the application of more effective decision tools and catalysing investment in their creation.” -Jack Scanell et al.

How to Build a Biotech Series by Celine Halioua

“Preclinical development encompasses all the steps up until you first test your candidate drug in patients or healthy volunteers. The general steps are (not necessarily all sequential):